As technology is growing react-native has gained immense popularity with strong community support and market share. It’s not that difficult to write brilliant apps using React Native. The major difference between React Native and other cross-platform solutions is that React Native doesn’t use Web Views in code. React Native uses native views and components.

Where you should use React Native services? 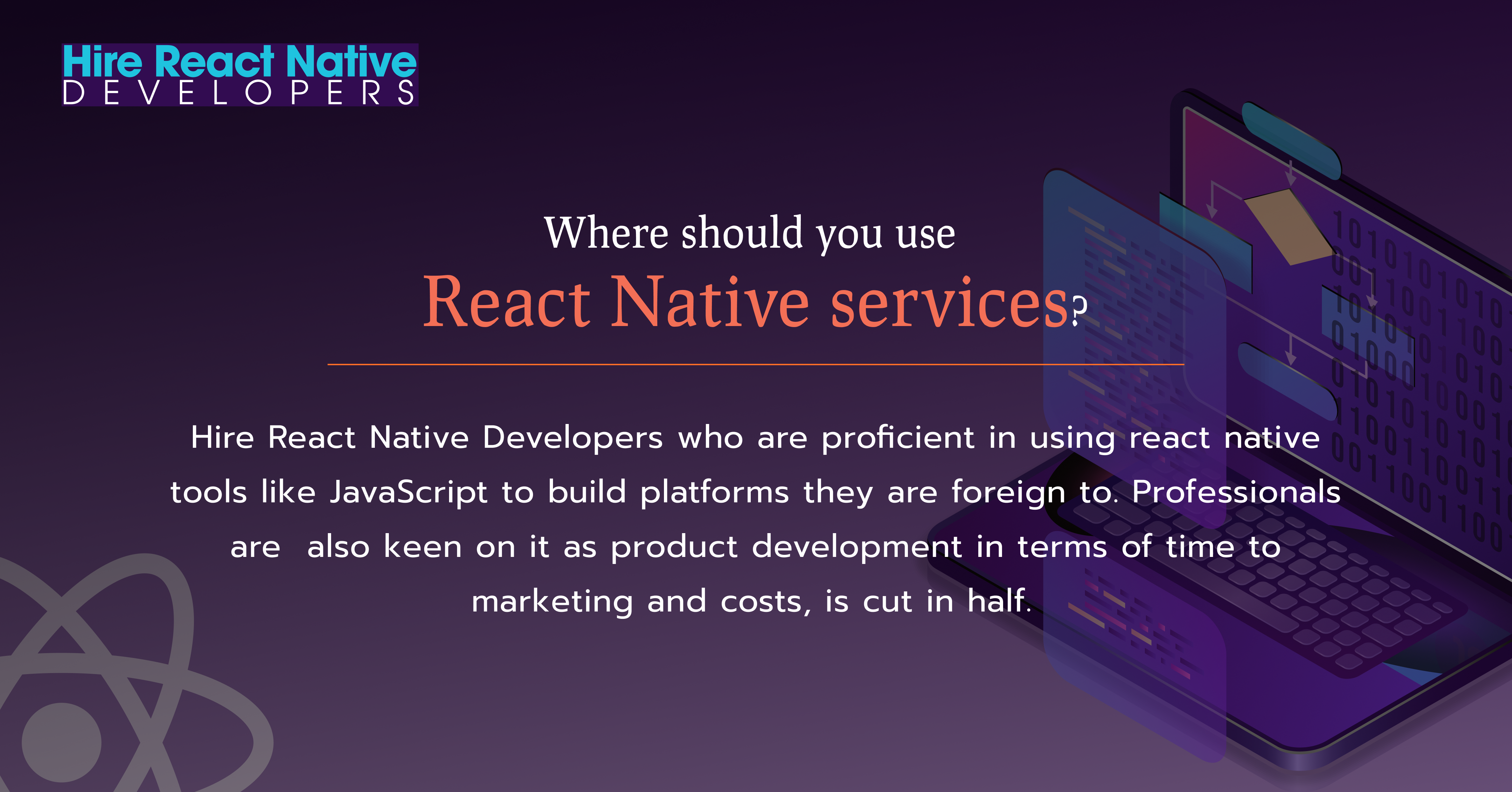 You should use React Native for cross-platform development. It is best for the practice of building software that is compatible with over one type of hardware platform. Cross-platform apps can run on many platforms such as Linux, Microsoft Windows, and macOS.

We consider it the holy grail of software development, with react native you can build your codebase once and run it on a different platform. Hence you can re-use the code for a specific platform.

Hire React Native Developers who are proficient in using react native tools like JavaScript to build platforms they are foreign to. Professionals are also keen on it as product development in terms of time to marketing and costs is cut in half.

When you should use React Native Services? 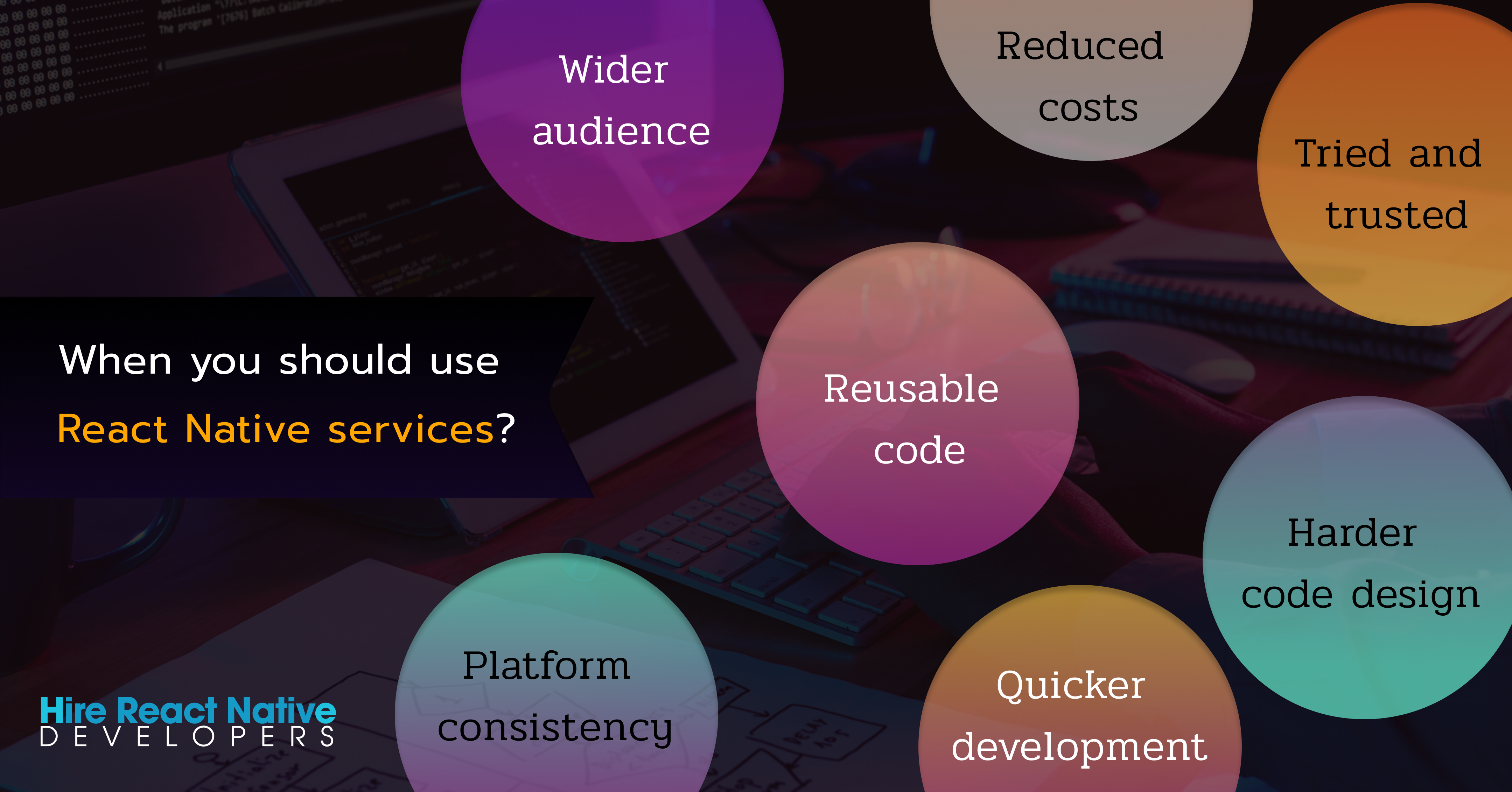 As react native provides cross-platform solutions, it’s easy to target a wide range of audiences with the help of both Android and iOS users. You can keep access to a wider user base.

Working on a different platform is not a simple task as there are some navigation and designs in each cross-platform development that are dealt with by default with the help of a shared codebase. It also helps for creating a consistent app brand identity on both platforms with less effort compared to native apps.

React Native provides reusable code services for cross-platform apps such as for both iOS and Android at the same time. However Native apps need to write code separately and frequently need two different software developers to run the apps on different platforms.

As you can reuse the code for different platforms everything will be in one place, hence product development is much easier. You can build apps on single projects, even though they support different platforms and devices with a huge amount of code that can be reused between platforms as we have discussed earlier.

Cross-platform apps respond to different devices and platforms, which makes coding more complex. It creates more load for developers who have to include exceptions for multiple platforms to account for the differences for more complex features.

React Native is built by Facebook to create a fantastic mobile app for their social portal. Till now, the way of the Facebook mobile app has used us all on our phone. It might feel like a Native app, but as react-native has gone open source, more companies are using react native for their mobile app business. The following are a few of them:

Note: Putting your app in such a company isn’t the worst idea in the world.

React Native Development is very popular and in-demand when your budget is limited and when you want to develop for only one platform. It doesn’t require a complicated interface, aces to native functions. It helps you to develop better-performing applications with faster development time.

The major selling point of React Native is a declarative view — you write components, and then just change state to trigger UI update. Once you get the concept of components, you can write your app fast.

From the above, React Native is a brilliant solution for cross-platform mobile apps. It works smoothly irrespective of the platform. It is one of the top platforms loved by both developers and businesses in the tech industry. It saves your work hours and allows you to access a wide range of audiences at once. The launch can be synchronized, and SMEs don’t have to work with a single platform only.

Hire Dedicated React Native Mobile Developers who are experts to take your app to the next level and knows how to use prominent React native app development services.

10 Roblox Games You Must Try Online on now.gg

Best Sports Betting Tips You Should Be Aware Of

Check Out These Bats for Sale for the Upcoming Season

Who To Select The Right Billiard Balls?

HoverBoards Take The World By Storm

Is Maca Or Ginseng Work For ED?

7 Healthy Hair Habits You Should Practice

The Advantages of Third-Party Pharmaceutical Manufacturing